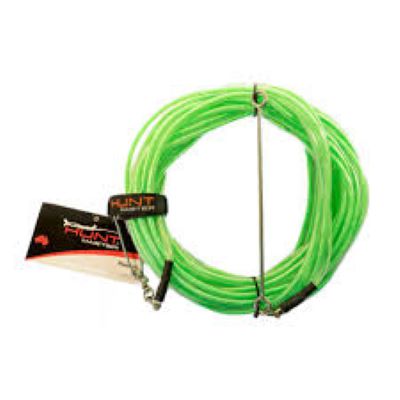 That’s right one tonne!! This makes it one of the strongest floatlines in the world and jacketed in an outer shell of 11mm durable and stretchy PVC, it’s also the most protected!!

If a picture paints a thousand words, then how about a video? Watch this! LINK TO THE VIDEO OF A BREAKING STRAIN TEST (Coming Soon)!!!

Firstly, it floats as it is sealed airtight by the insertion of 2 unique custom-made plugs which are made using CNC as opposed to a mold like some cheaper and inferior floatlines. These plugs are a much larger and more heavy-duty design to the ‘Reef floatline Plugs’ as it needs to withhold a lot more weight!
Secondly it acts a protective barrier and the 11mm PVC that protects the TUNA TAMER’s core is the thickest and strongest in the world. The Jacket prevents the dyneema core from getting cut or severed on reef and rocks, when under extreme pressure any line is a lot easier to cut, imagine a tight fishing line and you’re on point.
Finally, the PVC stretches, as mentioned earlier, this means that when a trophy fish such as a Marlin, Yellow fin or Dogtooth Tuna puts your HUNTMASTER TUNA TAMER to the test, it will take all the line and then tow and pull the float under the surface simultaneously. When this happens the float line will stretch, to about half its length again. This action not only fatigues the target but also prevents the spear from ripping out as there is always a constant elastic pressure on the fish which is also handy to keep the flopper toggled open at all times during a big run for those who prefer double offset instead of a sliptip.
Unique High Viz Colours:

These Unique High Viz Colours can be mixed and matched with the Huntsman and Huntress wetsuits, rashguards, Harbinger camo masks, snorkels and Huntmaster floats. Even the purple floats and floatlines can pair up nicely with the Blue Huntsman or Pink Huntress wetsuit, with slight shades of purple throughout the Harbinger Blue and Pink Camo!!!

These high Viz colors can also be crucial for safety, ensuring divers are seen by other boats and fellow divers.

The Speed Needle and Sharkclip Assembly:

Why a pair of Sharkclips to attach to your float?

These two shark clips are used to lock off any floatline you have managed to gain on your target. By pulling the floatline towards you and clipping the second shark clip off on the line, you will never have to fight the same fish twice again, gain a meter, keep a meter.

In certain situations, getting your fish target to you as soon as possible can mean the difference between landing a trophy or only getting its head on the boat! Instead of investing in a separate retrieval system for your floatline, we have incorporated a tried and tested system and taken the guesswork out of Blue Water Hunting.

To get a better understanding of how this system works watch the demo video here?? (Coming Soon)

The HUNTMASTER ‘Tuna Tamer’ floatlines have an attached Velcro strap on the floatline to use when coming on to a boat or storing away your line, reducing mess and tangles over time. This will improve the lifespan of the floatline.

There are no reviews yet.